On Friday, July 12, 2019, at hundreds of locations across the United States, people gathered at Lights for Liberty demonstrations to protest the outrageous, inhumane conditions people are experiencing in detention camps run by the Trump administration.

Pence visited an over-crowded and foul-smelling border facility in McAllen packed with nearly 400 immigrant men held in sweltering cages without mats or pillows where some said they had been detained for more than 40 days. https://t.co/3hrSOhY3mT

Members of the Miami Beach Democratic Club, organized by the Program Committee, traveled together to the Homestead Child Detention Center in Homestead, Florida to protest the Trump administration’s family separation policies, the grotesque human rights violations that we are hearing about in border patrol facilities at other locations, and to call for a return to basic human rights in our treatment of those who are seeking a better life for themselves and their children.

A small sampling of the big crowd waiting for the shuttle to the Homestead child prison camp. We are here to shine a light for Liberty. #lightsforliberty #lights4liberty https://t.co/GtyUYF0DGu pic.twitter.com/HNwKyI4qwI

More than 50 people RSVP’ed to go to the Homestead protest through the Miami Beach Dems’ website, and the Hotel Gaythering generously agreed to provide a van and a driver for 15 people through their shuttle service. We thank the Gaythering for going above and beyond in these times. 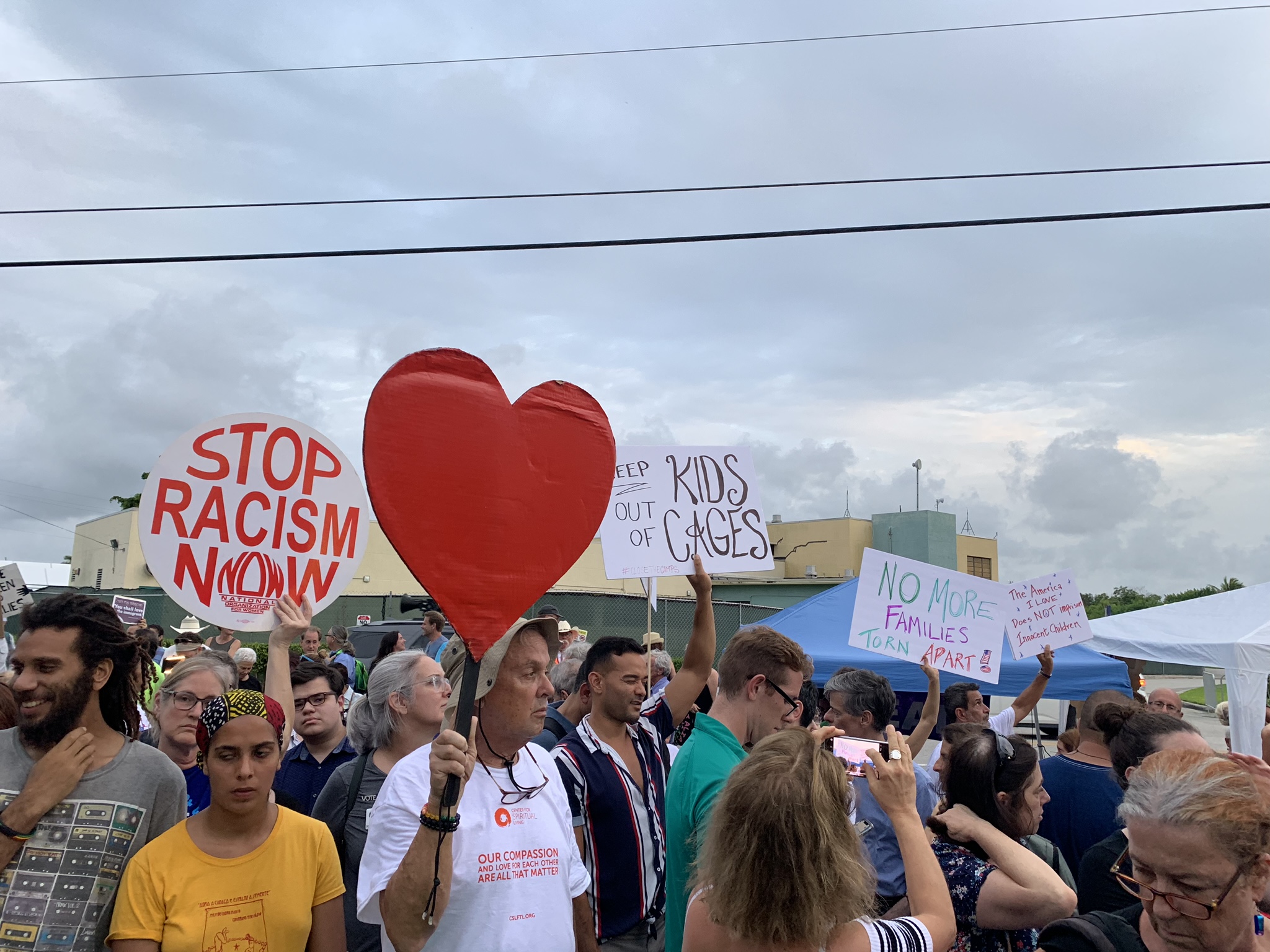 The Miami Herald covered the protest, saying “The children held at the detention center undergo “prison-like” regimens and may have sustained psychological damage from being away from their families, according to a May court filing by lawyers who visited the center. The filing details a daily routine that prohibits hugging and touching among housed children. Showers are limited to five minutes, and meals are 15 minutes, the filing states.”

Excerpts of the court filings were projected on the fencing that borders the facility on Friday.

Faith leaders from across the state are gathered with our community in solidarity with the thousands of children who are ripped away from their families and detained in for-profit prisons like the one we are gathered at. #LightsforLiberty

Give me your tired, your poor, Your huddled masses yearning to breathe free"

We are at #LightsForLiberty Homestead, in support of the children who have been and are continuing to be separated from their families. #familiesbelongtogether
If you're not here yet, you should be. ✊🏾 pic.twitter.com/Vj5gZiPG3a

Couldn’t make it to this protest but still want to do something to end the horrors of this administration? There are lots of ways to get involved, and we are working everyday to make sure Florida fires Trump and his enablers on November 3, 2020.

Sign up for our newsletter here to hear about events, voter registration drives and more.