Our November General Meeting was another good one! Big thanks to our special guests Senator Annette Taddeo, who is aiming to unseat Ron DeSantis in 2022, and Senator Jason Pizzo, who gave us the inside scoop on the special legislative session (hint: it was GOP political theatre). Read on for a quick recap, read the full minutes, or watch the replay on YouTube. And thank you to everyone who attended and made it worthwhile! 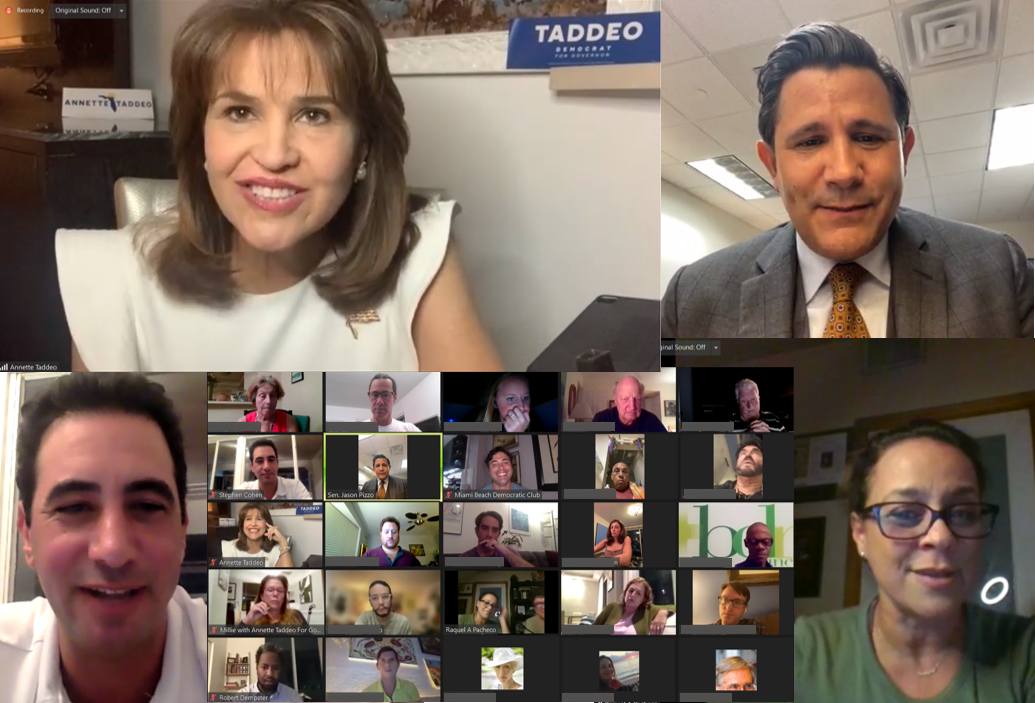 We started out live from Tallahassee with Senator Jason Pizzo, who was there for the special legislative session that was called by the Governor. He said that the bills being discussed had little detail and were being presented mostly to accommodate and clean up statements made by the Governor, and that they had nothing to do with helping everyday Floridians. He also gave us a preview of the upcoming 2022 legislative session then took our questions. He also mentioned that the redistricting process may move him out of representing Miami Beach. If that happens we will definitely miss him as our Senator!

Next we had Senator and Gubernatorial candidate Annette Taddeo, who was also in Tallahassee for the same reason. She spoke about her reasons for running for Governor, giving us personal accounts on her background and upbringing and what drives her. She spoke about her plans for Medicaid, education and child care. She then answered questions on what she would do as Governor on climate change and the environment. Her campaign has raised $650,000 and her campaign tagline is "Believe!"

Then we moved on to our Executive Board and Committee reports.

President Matthew Land talked about the Miami Beach run-off election, correcting the record on our club's non-endorsement in the Commissioner Group 1 race. Vice President Amanda Knapp reported that we raised $700 for our annual food drive and spoke about upcoming outreach events, including a holiday party on December 19 at the Hotel Gaythering (outside in the courtyard). Secretary Janet Silverman reported that we have 97 members and said we are hoping to expand that and rallied the group to encourage friends to join our meetings and join our club. Treasurer Patrick Breshike reported that we have $7275 in the bank. Communication Co-chair Steve Hawes said that we have seen an increase in the open rate on our emails, opining that it might be due to interest in the Miami Beach elections. Voter Registration Chair Teneramie Jimenez reported that we will have a voter registration event at the New World symphony - stay tuned for the date.

We then had Miami Beach Commission candidates Stephen Cohen and Raquel Pacheco, who gave brief statements about the run-off election and the importance of voting. We capped off the evening with a spirited discussion about the Miami Beach election campaigns with Miami-Dade DEC Chair Robert Dempster, which touched on themes of party unity the future of the Miami-Dade Democratic party.

Our next meeting will be held on Monday, December 13 at 7 PM. Click here to register. You can also read up on all of our meetings - past, present and future - on our Meetings page.