We had an awesome General Membership Meeting this past Monday and we are energized! A huge thanks to our special guests Commissioner Nikki Fried who is aiming to defeat Ron DeSantis and become our Governor, and Professor Charlton Copeland who gave us a fascinating look at the history of black female judges in the U.S. If you missed it, no worries! You can read on for a quick recap, read the full minutes, or watch the replay on YouTube. Thank you to everyone who attended, including our new members! 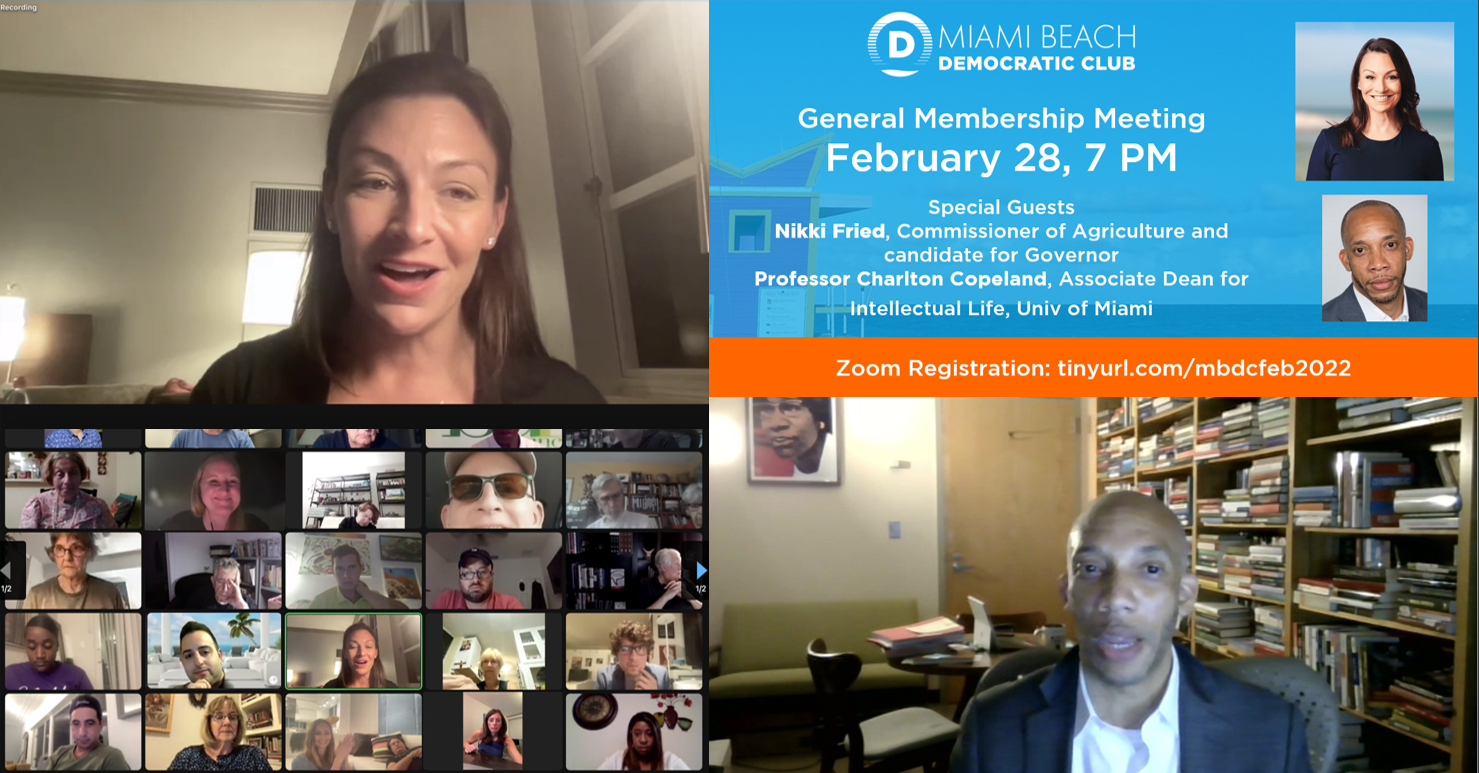 Vice President Amanda Knapp called the meeting to order and asked if any new members would like to introduce themselves, which they did - Richard, Allan, Jessica, Andrea and Phyllis. She reported that the Board had reached out to around 200 expired members, and that 20 rejoined. She spoke about the hugely successful Beach Cleanup that we hosted at the Marseilles Hotel, with over 30 volunteers (including 5 kids) cleaning up 95 pounds of garbage. Thanks to Dave and Dara from volunteercleanup.org and to Stephen Cohen and Commissioner David Richardson for providing lunch! Next, Secretary Janet Silverman reported that we have 116 members. Treasurer Patrick Breshike then reported that we have $7128 in the bank. Communications Co-Chair Steve Hawes asked for volunteers to join the Communication Committee. Program Chair Bill Warren spoke about the upcoming Pride Parade, where we will have our own double-decker bus as in the past, and he announced the Sponsorship program. Voter Registration Chair Tim Johnson stated that we registered 20 new voters at an action at the New World Symphony and that our next voter registration event will be March 13 at the Lincoln Road Antique Market.

Then it was on to our guest speakers!

Commissioner Nikki Fried joined us and gave us background on her own story and what is driving her to run for Governor. She took questions from the group on topics such as climate, solar power, and affordable housing. In response to a question about what we can do to help, she encouraged us to just talk to other folks, Republican or not, about real issues that matter to them.

Next up, was Professor Charlton Copeland, who was invited in honor of Black History Month, and who was introduced by Bill Warren. He delivered an awesome presentation for the group about the history of black female judges in the U.S.

Next, Christopher Richmond came on to let us know that there was a rally the following day to protest the Don’t Say Gay bill, and encouraged us to attend and wear purple in solidarity.

The Board of Directors met on Tuesday evening and with the 7-day average for COVID-19 around 5% for Miami-Dade County, we have decided that our March General Membership meeting will be a hybrid meeting. For those who would like to join in person, we will have an "Hour of Action" at 6 PM followed by our meeting at 7 PM. We will also be on Zoom for those who aren’t able to join us in person for any reason.